DiPol aims to collect knowledge on the impact of Climate Change on water quality, to communicate and raise awareness towards this knowledge, to improve the ability of decision makers to counteract these impacts on local and international level, and to facilitate public participation herein.

In 5 case sites, specific potential effects of climate change on the quality of urban and coastal waters were identified and knowledge gaps closed or reduced by event-based sampling surveys. The gathered data were used to feed a simulation tool, that was developed within diPol for decision makers. 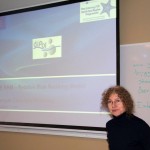 In order to facilitate communication of these issues, diPol was accompanied by pupils from 2 schools, in Oslo and Hamburg. During the project, a link was formed between these two schools themselves and between schools, teachers, and scientist, exchanging ideas, knowledge and visions.

Results of the diPol-Project can be viewed on – MAPMYCLIMATE; GoogleEarth

Heise, S., Angelstorf, J., Kottwitz, M. & Hsu, Pei-chi: Wilhelmsburg –
one of the largest river islands in Europe. Does it still hold the memory of an industrial history in the sediments? Poster, SedNet-Konferenz 2013, Lissabon